Hyères Festival 2015: And the Winner is… Aprons!

The 30th edition of Hyères International Fashion and Photography Festival took place from April 23rd to 27th in the town of Hyères in the south of France. Since 1985, it has been an event focused on young, avant-garde talent in photography and fashion design. Karl Lagerfeld was the Art Director of this year’s fest.

As every year, ten fashion designers selected from around the world were welcomed in February to the Première Vision Paris show. They benefitted from a privileged access to a selection of exhibitors in order to help them manufacture their collections.

And this year’s Winner of the Grand Prix of the jury Première Vision is : Annelie Schubert! 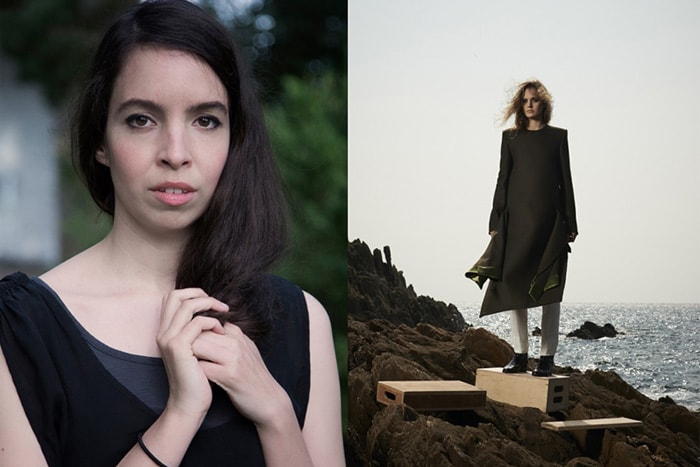 After seeing the entire 90-minute presentation of all ten finalists in competition for the Grand Prix, I thought Annélie was a pretty safe bet, although the gothic/horse-inspired collection by Taiwanese designer Yiyu Chen left indelible images in my mind for days afterwards. Yiyu won the the Prix Public de la Ville d’Hyères, the People’s Choice Award of the festival.

I noticed the apron trend in Yiyu’s collection and in the most outlandish collection of all, that of Finnish designers Heini-Maria Hynynen & Elina Aarela. In Yiyu’s show, aprons of thick black tassles covered shoes, giving an impression of horses hooves to the models’ feet stomping down the catwalk. In Heini-Maria Hynynen & Elina Aarela’s presentation, the models wore knitted sweater aprons with images of Rocky and the Terminator woven into them, tied over buttoned-up, colorfully-printed shirts.

One of Yiyu Chen’s designs. Love the tassled aprons on the shoes! Most outfits in her show were sexy, tighter, shorter.

This year’s jury was of course a who’s who of cool Europeans, mostly from the Parisian hyperchic set (It Girl Caroline de Maigret, fashion editor Carine Roitfeld, DJ Sebastien Tellier, the eternal KL…).

Watch for apron-inspired apparel to hit the shops in the next few months. They’ll be a lot more graceful and modern than your Tati’s old bleached tabliers!